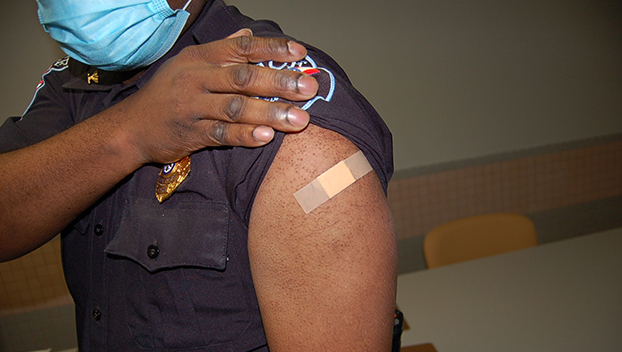 Natchez Police officer Justin Jones rolls up his sleeve to show his bandage after receiving a COVID-19 vaccine. (File photo / The Natchez Democrat)

The total cases in Adams County since last year, according to MSDH, now stands at 2,505 with 82 total COVID-19 related deaths. On Tuesday, MSDH’s total for Adams County was 2,473, which is 32 fewer cases than Wednesday.

Adams County Emergency Management Director Robert Bradford said he is concerned by the sudden uptick in cases but is unsure of the actual number of active COVID-19 cases in the county.

“Right now, we don’t get that information,” he said. “We just have to check the health department’s website day to day. We know there is an uptick in the numbers … but we don’t know when they were tested and how long they’ve had it.”

The slight uptick in new COVID-19 cases is not unique to Adams County.

During a Wednesday press conference with Mississippi State Department of Health officials, Dr. Paul Byers, epidemiologist, said Mississippi recently witnessed a minimal increase in the daily average of COVID-19 cases after seeing a decline in cases over several weeks.

“If you look at our seven-day average of cases, we’re now up to about 240 cases a day, which is just a minimal increase over the low 200s we were in during the earlier part of this month,” Byers said.

“If we are seeing an outbreak, we want to make sure that we limit the impact of it on the larger community,” he said.

With the change in cases, Bradford said he would ask the Board of Supervisors to revisit the countywide mask mandate, which expires on May 1, at the next board meeting on May 3.

Earlier this month, Bradford presented the Adams County Board of Supervisors with two options, one to extend the county mask mandate until June 1 and one to retire it on May 1 while continuing to restrict the number of people that can gather in county-owned facilities.

The majority of supervisors opted to retire the mask mandate on May 1 with Supervisor Ricky Gray voting against retiring it.

State and local officials’ main focus is getting people vaccinated.

According to MSDH, approximately 31 percent of Adams County’s population has received at least one vaccine dose while 25 percent have been fully vaccinated.

Statewide, 29 percent have had at least one dose while 24 percent are fully vaccinated, meaning 81 percent of those who have been vaccinated in the state got their second dose of either the Pfizer or Moderna vaccine or one dose of the Johnson & Johnson vaccine.

To be effective, two doses of the Pfizer or Moderna COVID-19 vaccine are required and both doses must be the same vaccine, MSDH states.

“We know the vaccinations have slacked off,” Bradford said. “A lot of people were waiting for the Johnson & Johnson vaccine but when Johnson & Johnson had that setback there were a lot of people who weren’t vaccinated still. Our goal is to get to 15,000 people vaccinated, which is about half of Adams County. We’re probably at 11,000, if that. We’ve got to make sure we get vaccinated so we can get back to some normalcy.”

State health officials announced Wednesday that the Johnson & Johnson vaccine would again be offered in Mississippi after the Food and Drug Administration ended its pause of Johnson & Johnson’s Emergency Use Authorization.

However, State Health Officer Dr. Thomas Dobbs said clinics and physicians are advised to warn patients of rare but potentially serious health risks associated with it.

Some recipients of the Johnson & Johnson vaccine, particularly women younger than 50, have experienced blood clots in the brain, abdomen and legs along with low levels of platelets after receiving it, however this symptom is rare and is significantly lower than the rate of death from COVID-19 infection in the same age group.

“Acknowledging that risk is there, we sent out guidance to clinics and physicians if they choose to offer that vaccine to their patients that they make sure their patients are aware of the risks, especially if they are women under 50, and that they understand that there are highly effective alternatives,” Dobbs said.

City raises fines for littering to $500

NATCHEZ — Those who choose to litter in Natchez may also pay a $500 fine for doing so. The Natchez... read more