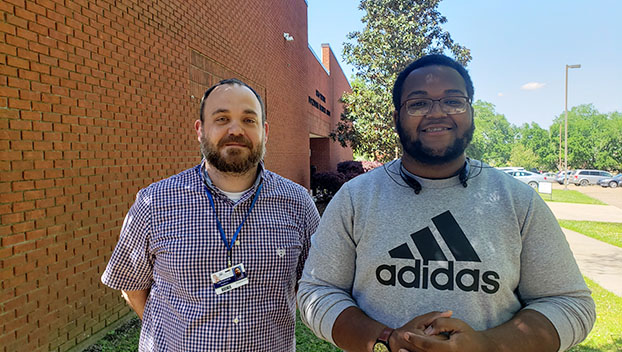 From left, Tim Tanner and Quadrick Bradford have been named the STAR Teacher and STAR Student at Natchez Early College Academy for the 2020-2021 academic year. (Sabrina Robertson | The Natchez Democrat)

The Student Teacher Achievement Recognition program, or STAR program, was established by the MEC in 1965 to recognize outstanding students and teachers in Mississippi.

Bradford is the son of Robert and Sharon Bradford and enjoys photography, music and reading. He also serves as a sound engineer in the school’s comic book club, he said.

Bradford plans to study interior design at Mississippi State University after graduating from NECA with his diploma and an associate’s degree in general studies.

Bradford said he is interested in interior design because it entails much more than “making things look good.”

“There is so much that factors into it — like what is friendly to the environment and friendly economically,” Bradford said. “I think it would be a perfect use of my skills. … I like looking at things and thinking about what it could be.”

STAR Students are selected on the basis of academic excellence using their American College Test scores and grade point average.

Bradford said scored 31 twice on his ACT, however, his combined score of the two tests gave him a composite score of 32. The highest score possible is 36 and the average score is 21.

The STAR Students designate the STAR Teacher for their school and Bradford chose his science teacher, Tim Tanner.

“He is a great teacher and an even greater person,” Bradford said of Tanner. “Being in a class with him for so long, I’ve gotten to know Mr. Tanner and that is why I chose him.”

“He gets his work done quickly and goes above and beyond,” Tanner said. “It wasn’t a surprise to me when we heard he was the STAR Student. I can think of anyone else it would be.”

NATCHEZ — Adams County Sheriff’s Office has apprehended a teen who investigators believe is linked to the May 1, 2020,... read more