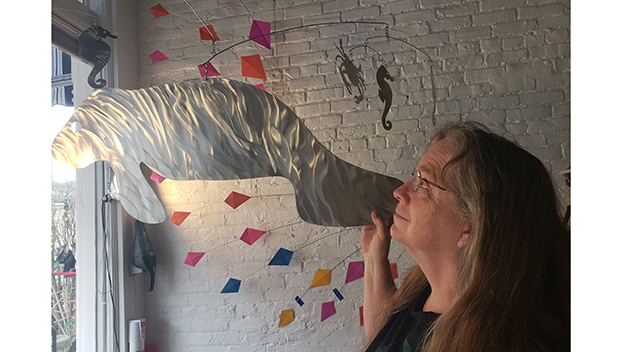 A manatee mobile hangs in a new studio called Skysetter Designs - Mobiles and Art at 118 N. Commerce St. Artist Carolyn Weir, at right, has been in the business of making hand crafted mobiles since 2009. (Sabrina Robertson / The Natchez Democrat)

NATCHEZ — Carolyn Weir has a unique craft that no one else in Natchez has and only a few people in the country have.

She is an artist whose canvas suspends from mid-air.

Weir said she moved into the new studio for Skysetter Designs – Mobiles and Art at 118 N. Commerce St. in November but has been in the business of making mobiles since 2009. Weir said hand skills learned over 30 years of making jewelry and quilts helped her with making mobiles.

“I used to make jewelry and someone commented that one of my pieces looked kind of kinetic so I started looking up kinetic jewelry and came across these mobiles and thought, ‘I can do that.’ It has snowballed from there,” Weir said. “In 2013, I had to walk away from my job (as an accounting manager for Jordan Carriers) to do this full time.”

Weir is native to Los Angeles and has lived in Natchez since 1999.

Her business is done almost entirely online at skysetter.com or Etsy, so starting out in a new studio during the COVID-19 pandemic was not a big issue, she said. Her mobiles are also displayed at Arts Natchez Gallery.

Most of her mobiles start at $75 each and can sell for as much as $4,000 dependent upon the size and complexity of the art.

Weir ships approximately 400 mobiles a year all over the United States and some internationally.

Weir recently hired an assistant Robin Donson — who was also in jewelry making — to help her at Skysetters.

Weir said she never works a day in her life yet always stays busy. One mobile can take anywhere from 3 to 80 hours to finish.

“Like painting, where time does not exist while your working, when I am doing this I am thoroughly 100% entertained,” she said. “It’s just fun.”

The style of her designs varies. Recently Weir as set out to make stainless steel sea creatures and bird mobiles that look as though their animal figures float majestically or fly through the air.

For some of her shapes, she uses a plasma cutter but others are so thin and delicate that she outsources the cutting with a company based in Utah to prevent damaging the edges.

The majority of her pieces are just shapes that are indescribably unique and interesting to look at it.

For her under-the-sea mobile, Weir takes her artists’ brush — or this case an angle grinder — and draws the fins and gills herself.

She also hand paints and spray paints some of her pieces and will paint over the ocean mobile with an iridescent blue coat that creates an ocean-like reflective look.