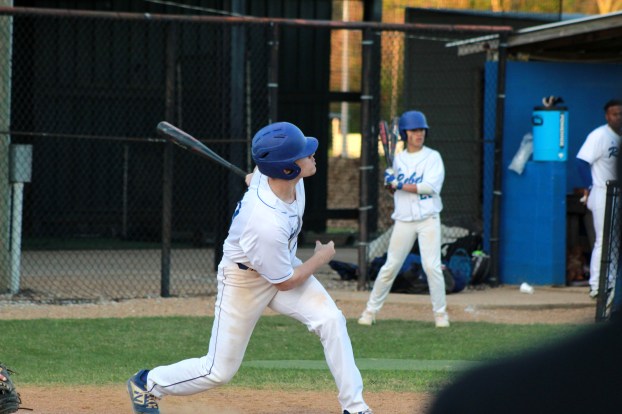 Blake LaPrairie’s watches the ball leave his bat for left-center field for a home run in the bottom of the seventh inning. The three run blast walked off the game and was his first career homerun. ACCS won 9-6 in the first game and 6-5 in the second game of their double header with Oak Forest. (Hunter Cloud The Natchez Democrat)

Blake LaPrairie’s first career home run could not have come at a better time for ACCS Thursday night.

Tied 6-6 in the bottom of the seventh with two runners on base, LaPrairie cranked a pitch over the left-center wall. He jumped up and yelled “let’s go,” before noticing Oak Forest’s left fielder had run into the fence. He quietly trotted around the rest of the bases as ACCS walked off 9-6 in the first game of their doubleheader.

“That was my first actual high school home run,” LaPrairie said. “It is a great feeling. It just all runs through your body, it’s crazy. It being a walk-off made it even better.”

The senior said he last played baseball when he was 12 years old. He was asked to join the team this year and he did, he said.

Rebels head coach Jake Winston said he had asked him to join the team and was thankful he did.

“He is just a grinder. I love the way he plays,” Winston said. “I’m happy to have him out here and he is coming around for us. He’s a strong kid. He has been out here since day one. He has been grinding and he has been working hard. Now, he is being rewarded for it.”

ACCS jumped out to an early lead in the second game of their doubleheader with Oak Forest. The Rebels had a three-run cushion going into the seventh inning.

A two-out, two-run double made it a 6-5 inning, but the Rebels were able to finish off the next batter and hang on to win. Winston said he was not scared. He said he believed his team could hang on and finish the game.

With the win, ACCS completed its sweep of Oak Forest. It is the first sweep of a district opponent in two or three years of the Rebels. Their main goal is to make the playoffs, LaPrairie said.

The Rebels shift their focus to Silliman next week with just two weeks left in district play, Winston said.

“I’m super proud of the boys. Getting a sweep is a big-time thing, especially in district,” Winston said. “Just have to keep the momentum going forward from week to week.”