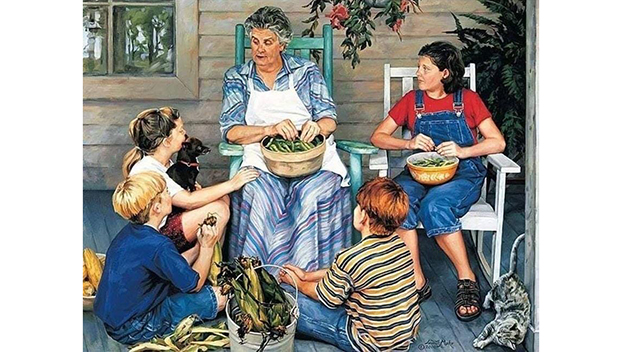 This painting, by internationally-known artist Judith Ann Mehr, shows Helen Huff on the porch at her family’s farm in Red Star, talking with her grandchildren and their friends while snapping peas. King said, “You can clearly see from the painting that Snap Chat really does work.” The artist, Mehr, is Huff’s niece.

This is what old folks call Snap Chat

This lady was my next-door neighbor in Natchez when I was growing up.

Her name is Helen Huff. She was and is still a remarkable person. She is now deceased but she is still serving others of that I am sure of.

This is a painting of Helen Huff shelling snap beans on her front porch at the Family Farm in Red Star Mississippi (close to Brookhaven).

The Huffs raised a large family garden in Red Star every year. I spent many an hour in Red Star and in Natchez shelling bowls of peas or beans with Helen Huff and her family members. I was part of their extended family and this was actually Fun Stuff for us to do as a group.

Helen Huff was one of the best member missionaries ever. She was a member of “The Church of Jesus Christ of Latter-day Saints” (also known as LDS).

Helen never met someone that she couldn’t talk to about anything. She always respected your opinions even if she didn’t quite agree with them personally. She wouldn’t ever argue with you. Everyone who knew Helen respected her immensely as a person.

Helen served in numerous volunteer (unpaid) church callings throughout her life. She was particularly invested and heavily involved with serving Youth. I attended numerous out-of-town church youth dances, summer youth conferences, youth ‘Super Saturday’ events, and many other youth activities that Helen Huff was both the driver and the youth chaperone for.

Late in life, Helen and her husband Rayford served together as a full-time LDS Temple Missionary couple @ the Atlanta GA Temple.

Helen’s husband Rayford Huff was a Full-Bird Colonel in the Army Reserves and a major department supervisor at the Natchez International Paper Mill. He was over the Natchez Mill’s warehouse as well as the entire shipping and receiving department.

Despite his power positions in both the Army and at Natchez IP Mill Rayford Huff was always approachable. I was surprised at just how many people locally knew who he was and the respect he was always afforded by others even if they were speaking of him in his absence.

Rayford also served voluntarily (unpaid) in numerous important church callings all throughout his life. He was the Natchez (LDS Church) Ward Bishop for a few years when I was a teenager.

For many years we would volunteer to cut the grass (for free) at the LDS Church Building site which was then located on Hwy 61 South. Rayford, his youngest son Barry (my best friend), and myself would usually be the ones to do the grass. Strange that it never felt like we were working hard when we were together serving God and others.

Helen Huff had 6 kids all of whom were and are successful people and very productive members of society. Helen and Rayford have numerous grandkids and great-grandkids.

Former Natchez Chief of Police Willie Rae Huff was one of Helen’s children. Her daughter Paula (Huff) Blalock later married successful Attorney Tim Blalock who was my Scout Master in the Boy Scout program in the ’70s and ’80s when I was a teenager.

Her youngest son Barry Huff was my best friend growing up and the best man at my wedding. He currently works for the Lincoln County Sherriff’s Department as an investigator.

You can see clearly from the painting that ‘Snap Chat’ really does work.

God places these giants among us.

‘Thank you’ barely covers it

I think I speak for the majority of the south when I say we are tired of living through historical... read more