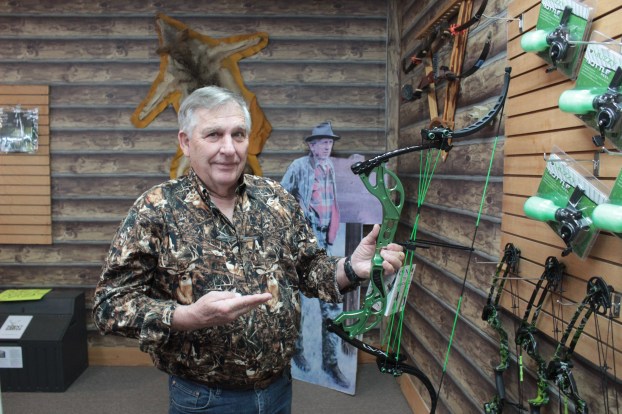 Carp, Gar are the bullseye in Bowfishing

As carp and gar roll at the surface for oxygen, it gives a bowfisherman the opportunity to release a pronged arrow attached to fishing line to land their catch.

Chris Poole, owner of Gill Busters Bowfishing in Jonesville, Louisiana, said the experience of bowfishing is not something he can describe, people just have to experience it.

“You just have to go bow fishing one time to see how it is,” Poole said. “It is action packed all day long.”

Anglers can bowfish during the day or night and it is a fishing method Homer Hewitt said fisherman use to target trash fish such as gar and carp. He said they are trash fish because they are not good for eating.  He said it is possible to eat gar if they are cleaned right.

He is the owner of Hewitt’s Archery located at 21 S E.E. Wallace Blvd Ferriday, Louisiana and he sells equipment needed for bowfishing. He said he first got into bowfishing and bowhunting in the 1960’s, and bowfishing is an activity he has kept up to stay ready for deer season.

He said bowfishermen use an arrow with special prongs to snag the fish, a reel attached to their bows and fishing line to reel the arrow in. Hewitt said arrows should be equipped with a safety slide to prevent injury or death.

Poole said Gill Busters provides all the equipment needed, except for drinks and snacks. He said a trip costs $100 a person and trips can last between 6 to 8 hours.

Anglers need a fishing permit for bowfishing in Mississippi or Louisiana according to the respective departments of Wildlife and Fisheries.

In addition to a fishing permit, anglers need a bow with lower poundage than used for deer hunting. Hewitt said the typical poundage used for bow fishing is 15 to 30 pounds. He said recurve and compound bows could be used for bowfishing.

He said bowfishing is another way for deer hunters to stay active with a bow and arrow outside of deer season. He said you do not need a boat to bowfish. You can use a light and a pier, or even wade in the shallows when the water is warm.

“In the summertime when you go out they are always biting,” Hewitt said. “If you can see them they are biting, because you can shoot them.”

Poole said there is a need for more bowfishing to try and control an invasive carp species. He said he believes he is the only bowfishing guide in the Concordia/Catahoula Parish area. The more people who target silver carp he said the better.

Poole and Hewitt said silver carp are destroying the river habitat. Hewitt said he used to be able to pilot his boat at 60 mph on the Tensas River until silver carp made it too dangerous to do so.

He said silver carp would jump into the air and hit people in the boat and one hit his son. Poole said they do more than make the journey on the water dangerous, silver also pose a threat to other fish.

“They are destroying our waterways and our structure, because they eat all the grass around the sides to where there is no cover,” Poole said. “There is nothing for the other fish. They are an invasive species. It is a population control, but we aren’t hurting the population any. You can’t kill enough of them and they are breeding constantly.”

Cathedral’s pitcher Noah Russ thinks of three things when he is on the pitcher’s mound. Hit his spots, throw strikes... read more