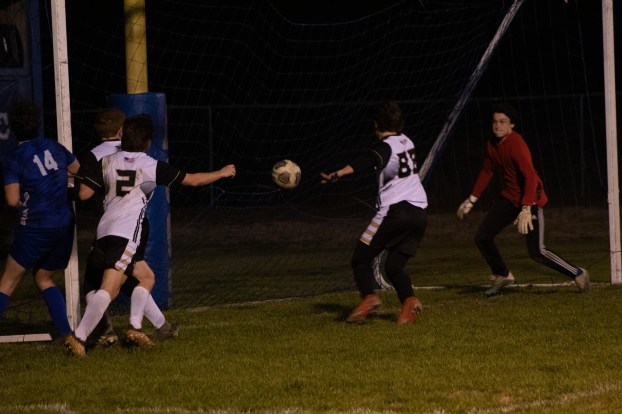 A headed ball rattled on the bar and appeared to have crossed the line when Adams County Christian School goalkeeper Brody Watts cleared his goal line.

Mere inches from a goal or no goal won the game for ACCS in a 3-2 thriller against Oak Forest Monday night. Oak Forest’s head coach Trey Cavaretta said it was heartbreaking to not have the goal count in his team’s favor.

With just two referees it was nearly impossible for either referee to be able to see if the ball had crossed the plane of the goal line. In soccer a ball must completely cross the goal line in order to be considered a goal.

Shortly after the game first started Oak Forest created a couple of close chances and even had a shot bounce off the post. It was the Rebels who scored first as Nolan Owens timed his run perfectly and finished a chance to put the Rebels into the lead. Cries for offsides came from the visiting fans.

Oak Forest would equalize later in the first half as they won a penalty for a foul in the penalty box. Dale Slay stepped up and slotted the penalty home into the upper right hand corner.

Towards the end of the half tensions and emotions hit a boiling point resulting in two yellow cards. A referee explained at halftime that an Oak Forest player gave an elbow to an ACCS player. The Rebel reared back to punch and as a result they both received yellow cards.

Oak Forest took the lead in the second half when a cross into the box was met with the diving header of Slay. He dove head first and made contact driving the ball into the goal.

Another goal by Owens made it 2-2 and it was a beautiful goal. After two Oak Forest defenders collided, Owens found himself with the ball and dribbled into the box firing a shot low and at the near post.

It was first called a no goal because the ref thought the ball went through the side of the goal and Owens argued with the referee. A few encouraging words from Allgood, and a discussion by the refs reversed the call on the field.

With 13 minutes left Juan Boteo got onto the ball in the box and fired a shot past an outstretched keeper to send ACCS into the lead. Boteo was also crucial in the match for his efforts to calm down his fellow teammates.

Multiple yellow cards were handed out in the game for dissenting the referee and Cavaretta received a red card towards the end of the game.

After the dust had settled on the field Watts was joking and dynamically showing how he kept the ball out of his goal. How the ball never hit the bar or made it past the two players in the mouth of goal is pure chance, but regardless Watts clearing the ball won the game for ACCS.

“You’re my hero Brody,” an ACCS player yelled on the sideline after the game. The Rebels win meant they have a chance to make the playoffs, or at least it gave them another chance to play in the playoffs.

At the conclusion of the game it was unknown if ACCS or Cathedral will be in the playoffs. Both teams are deadlocked on the tie breakers .

ACCS Athletic Director Richy Spears explained to Allgood that the goal differentials were even because MAIS caps goals counting towards a differential at 5 per game for a team. According to the MAIS rulebook, Cathedral and ACCS will play each other in a play in game.

The winner of the game will advance to the playoffs. Cathedral’s coach Dennis Hogue said the game will be played at Cathedral tonight. Kickoff for the match will be at 5:30 p.m.