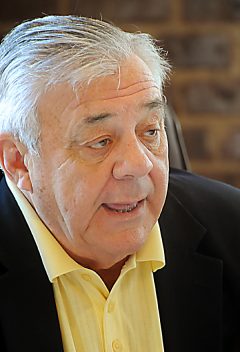 NATCHEZ — Former Natchez Mayor Butch Brown is off of a ventilator and is responsive and his health improving at a Jackson intensive care unit this morning.

Brown’s son, Larry L. Brown, said his father was awake and had eaten this morning.

“We got a good report this morning,” Larry Brown said. “He’s awake and responsive, but is a bit confused. He’s still coming around.”

He said his father’s health issues are not COVID-19 related.

“He tested negative for COVID last week. It started out as a simple infection but he coded last Sunday night in the emergency room. His heart actually stopped,” Larry Brown said.

Brown was taken to the emergency department at Merit Health Natchez a week ago today, Larry Brown said.

“He was fine on Saturday, but last Sunday, he had a high fever and was nauseous. We thought he had a urinary tract infection. That’s what they were treating him for. By late evening, he was doing much better in the ER,” he said. “But they didn’t have any beds in the hospital, so he stayed in the ER.”

Sometime in the middle of the night last Sunday, Brown’s heart stopped. However, emergency department personnel were able to revive him.

“That’s when he went on a ventilator. He was still in the ER at Merit Health on a ventilator until Thursday, when they found an intensive care unit bed for him in Jackson and transferred him,” Larry Brown said.

“He really started improving yesterday and was able to come off of the ventilator this morning.” he said. “He has a long way to go, but he is improving.”

Brown served three terms as mayor of Natchez, choosing not to seek re-election in 2016. Brown also served as executive director of the Mississippi Department of Transportation for eight years. Health issues have hampered him, including suffering a stroke, since he left office in 2016.