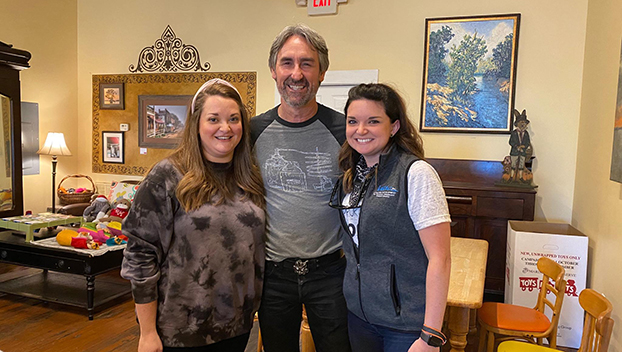 NATCHEZ — Last week, “American Pickers” star Mike Wolfe said he drove to Natchez in his 1950s-era Chevy Impala, riding along the Natchez Trace for most of the trip down from Nashville.

Wolfe said he has been in town filming personal interview segments for “American Pickers” with his entire film crew and his canine companion, Frankie, in Natchez and has been enjoying his time in the city between shoots.

“I’m a Southerner by choice, not by birth,” Wolfe said. “I respect this area a lot because of how much you hold on to your history, family and community.”

Wolfe said he fell in love with Natchez from his first visit, and this most recent stay is his third. His last Natchez excursion was during city’s tricentennial celebration in 2016, he said.

“Natchez has always had a little piece of my heart,” Wolfe said. “Obviously, I love history and I also enjoy architecture and Main Street communities and Natchez has some of all of that.”

Wolfe said during his stay, he has walked the downtown area with Frankie, frequented restaurants and visited the park behind St. Mary Basilica, Dunleith and a number of historic buildings.

Wolfe said he has enjoyed meeting people such as Stacy Conde, a Miami native and owner of the Conde Contemporary art gallery on Main Street, and Tate Taylor, a film producer in Church Hill, who both decided to invest in Natchez and make it their home.

Wolfe said he also met several natives who expressed a deep-seeded love for the city, which he admires.

“Everyone I’ve met talked about how much they love the community,” Wolfe said. “Everyone has been extremely welcoming.”

Wolfe said the parts of “American Pickers” being filmed during this trip are in a plain setting that will not necessarily be “recognizable as Natchez” when the show airs, but he plans to return in January or February to film more scenes in the area.

The documentary show, which airs Monday nights on the History Channel, focuses on collectors — or “pickers” — of antique items with historical significance and learning the unique stories behind them.

Wolfe said he is headed back to Nashville Sunday and will be filming his next segments in Texas. New shows premier in January at 8 p.m. Central Standard Time on the History Channel.

Wolfe and his costar, Frank Fritz, are looking to discover more “rusty gold,” unique items that they have never seen before and hear fascinating tales about them, a news release from “American Pickers” states.

“American Pickers is looking for leads and would love to explore your hidden treasure. If you or someone you know has a large, private collection or accumulation of antiques that the Pickers can spend the better part of the day looking through, send us your name, phone number, location and description of the collection with photos to: americanpickers@cineflix.com or call 855-OLD-RUST.”

NATCHEZ — Health leaders throughout the nation are asking people to change up their traditional Thanksgiving celebrations to lessen the... read more