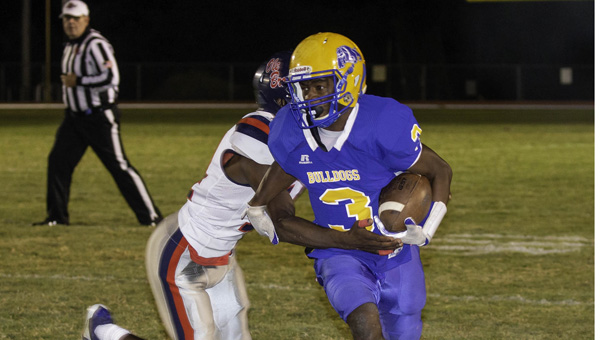 Special to the Democrat

NATCHEZ — A Panther fumble almost gave Natchez a come-from-behind victory, but a Brookhaven interception dashed the hopes of the Bulldogs who lost by 3 points, 41-38.

COVID-19 and bad weather combined to restrict the football season for both Natchez High and Brookhaven High to just four games. Both were anxious to get back on the field as the playoffs approach.

Fall weather arrived in Natchez on Friday for the Bulldog’s final regular season game, driving fans to huddle under blankets to cheer on the Natchez Bulldogs and Brookhaven Panthers.

The early predictions of an offensive shoot-out proved out to be true, as both teams scored early and often.

Senior Joshua Trask kept the quarterback from being sacked, and under his leadership the defense fell just short of victory.

“Joshua is one of the most talented yet humble guys on the team,” said Assistant Coach Josh West. “You might not hear him speak unless you ask him a question. He is a young man with terrific manners and easy to coach, and I’m so proud of him.”

With a 4.0 grade point average, Trask has aspirations to play college football and plans to major in mechanical engineering.

“Playing football as a Bulldog has been important in my life since junior high, and I have learned to persevere through adversity,” Trask said.  “It is tough to lose the last regular home game, and I’m thinking about how I’ve loved football since I was eight years old. Coach Craft always tells us that ‘Everything starts up front’ and that is especially true as we protect the quarterback and running backs.”

As the clocked ticked down in the fourth quarter, Natchez Head Coach Randy Craft put Trask in on the defensive side as well. With Trask on the line, they successfully stopped the Panthers in the red zone with 3 minutes to play.

A fumble by Brookhaven gave the ball back to Natchez with less than a minute in the game, but the Panthers intercepted the pass and the game ended.

Natchez will play at South Jones (Ellisville) next week in the final game of the regular season and hopes for a favorable position in the playoffs.

NATCHEZ — Hillcrest Christian School did its best to hang around with Cathedral High School, but the Green Wave had... read more