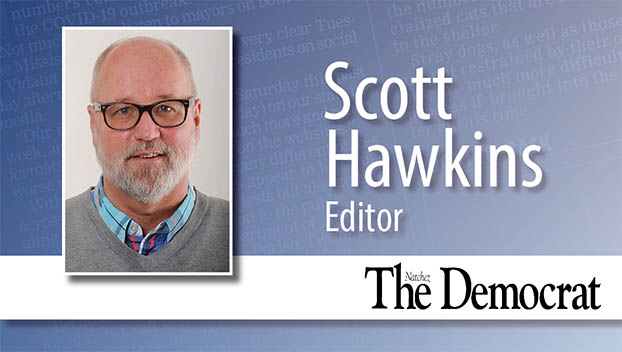 Counting our blessings in aftermath of Delta

Natchez and Adams County took a pretty good blow from Hurricane Delta when it blew through the Miss-Lou on Friday and Saturday.

The biggest problem, however, was the thousands of electric customers in Natchez and Adams County who lost power.

Combined, approximately 10,000 Adams County customers of Southwest Electric and Entergy lost electricity due to the storm.

That is a lot of customers without power.

Mostly falling tree limbs and trees that were either blown by the wind or toppled from the soggy ground knocked out the power lines.

When the storm was approaching, I took some solace in the fact that Hurricane Laura had only moved through the area approximately six weeks earlier and I thought that most of the weak limbs and trees had already been culled by that storm.

Boy, was I wrong.

By the time the storm had moved out of the area Saturday limbs and trees were down throughout the county and plenty of electric lines went down with them.

I was fortunate at my house not to have lost electric power, but I did lose my internet, which is not as hard to get by without as not having electricity.

Never fear, though, I was able to tether my computers and streaming television services to my smart phone and it was like I never missed a lick.

I have no complaints, as I know plenty of other people suffered worse than I did and many, approximately 1,700 residents of Adams County, were still without electricity on Monday.

In Concordia Parish, they had only minor power outages that lasted for a matter of hours. Vidalia Mayor Buz Craft put it nicely as only he can, “We were prepared for the worst and prayed for the best and we got the best.”

That is great for Concordia Parish even though at least one house in Ferriday had a tree on the roof and some scattered residents had extended power outages from the storm.

I feel for them.

Above all, however, I can only imagine the pain and suffering of people in South Louisiana in Lake Charles and along the Louisiana coast where Hurricane Laura made landfall in Cameron on Aug. 27, according to the Associated Press, and Delta came in near Creole, just 13 miles to the east of Cameron.

The residents of those areas had hardly begun to dig out from the hit from Laura and many of them still had tarps on their roofs when Delta dealt them a double blow.

As bad as Delta was in Adams County, we can always thank God it wasn’t worse.

Hurricane Delta was bad; could have been worse

Preliminary reports show that Adams County received more than $125,000 in damages due to Hurricane Delta that move through Southwest... read more