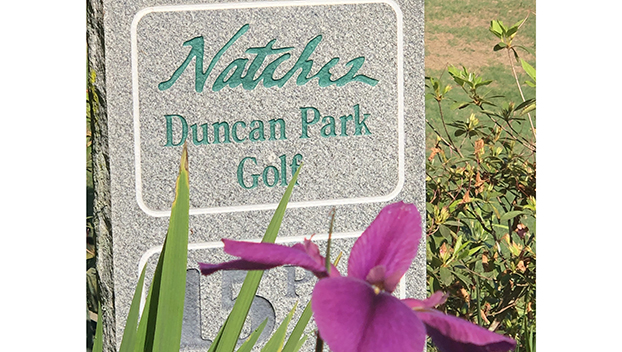 A marker for a hole on Duncan Park Golf Course in Natchez. (Submitted Photo)

NATCHEZ — The Natchez Mayor and Board of Aldermen renewed an eight-year contract with Greg Brooking to manage the Duncan Park golf pro shop on Tuesday but not without hearing some opposition from members of the board.

Ward 2 Alderman Billie Joe Frazier moved that the board enter a closed determination to discuss the contract during Tuesday’s regularly scheduled meeting.

“This contract stinks. It smells like fish and we need to discuss it,” Frazier said, adding that the city has no other contract lasting more than four years.

Frazier said in the new contract, which is consistent with the previous one, the city gives Brooking approximately $500,000 to run the shop for eight years.

“I am against giving anyone an eight-year contract. This is unheard of. … I will say this, too,” Frazier said. “We are giving away money. This man is given no kind of accountability in the golf contract.”

Frazier’s motion to go into closed determination failed after Natchez Mayor Dan Gibson broke a tie and voted to remain in open session.

“In the interest of transparency, I think transparency demands an open discussion,” Gibson said. “I would encourage this board to openly discuss this contract. Whatever grievances you have, make them public.”

Gibson said Brooking is “a hardworking Natchezian” who has agreed to charge the city a flat fee for his services without increasing it.

Aldermen Davis, Irving and Hall recommended that a review of the point of sale system be implemented with the new contract.

Irving said that an electronic point of sale system needed to be offered at the shop so that customers would be able to use credit and debit cards and all transactions would be recorded electronically.

Irving also recommended that Visit Natchez should be tasked with marketing for the golf pro shop.

The motion to renew the contract with both revisions passed on a vote of 4-1 with Frazier voting “nay” and Irving abstaining from voting.

“I agree with Mr. Frazier about a four-year contract,” Irving said of her abstention.

Natchez City Attorney Bryan Callaway said in four years a next administration could void the contract. However, Frazier said that he had been told by the prior administration that the contract could not be voided or changed until it expired.

NATCHEZ — Adams County Supervisors are considering a request from Adams County Sheriff Travis Patten for permission to do an... read more