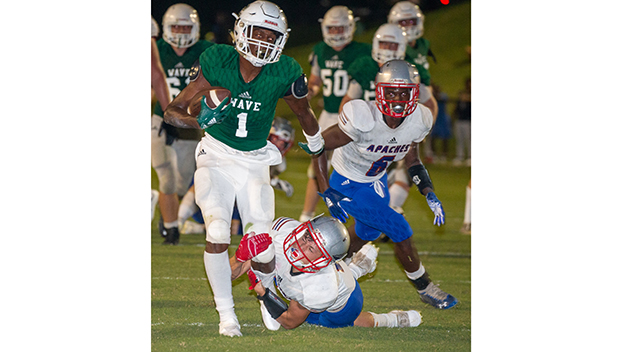 The Green Wave will also look to avenge last year’s heartbreaking 34-33 loss to the Cougars.

“To me, it’s the biggest game of the year. We have a chance to beat the No. 1 team in 4A and be 2-0 in district,” said Chuck Darbonne, Green Wave head coach. “Being 2-0 in district would be a great accomplishment. It would build confidence. We’re looking forward to playing a home game. I believe after the practices we have, we’ll be ready mentally and physically to have a great game Friday night.”

Both teams head into this clash with 4-0 overall records. However, Cathedral is already 1-0 in district play after thrashing Hillcrest Christian School 51-7 two weeks ago. This will be the district opener for Brookhaven Academy.

Last week, the Green Wave rallied from an early 12-0 deficit to defeat Glenbrook School 62-37 on Senior Night thanks to Bryson Moore and Kaden Batieste, who combined for over 400 rushing yards and six total rushing touchdowns. Noah Russ threw for just under 200 yards and on 14-of-20 passing, including a 12-yard TD pass to Christian Wright, who had nine catches for 108 yards

Darbonne said Cathedral is working on trying to get better fundamentally this week at practices.

“We want to get better defensively as far as tackling goes,” Darbonne said. “We are just trying to get better every day at something.”

“They are the leaders of our team. We expect all of them to come out and have a great game,” Darbonne said. “Any of the eight, they are the keys to us playing well. The energy and the experience they bring.”

Darbonne said the keys to victory for his team would be in the trenches as well as creating turnovers.

Meanwhile, the Cougars cruised to an impressive 53-6 win over Centreville Academy. Tyler Fortenberry threw for 219 yards and three touchdowns on 11-of-18 passing and he had five carries for 90 yards. Luke Johnson had 13 carries for 91 yards. As a team, they racked up 532 total yards of offense.

Kickoff for this important MAIS District 4-4A game between Brookhaven Academy and Cathedral is set for 7 p.m. on Friday night at Cathedral High School.

NATCHEZ — The Adams County Christian School Rebels will look to get back on the winning track Friday night when... read more