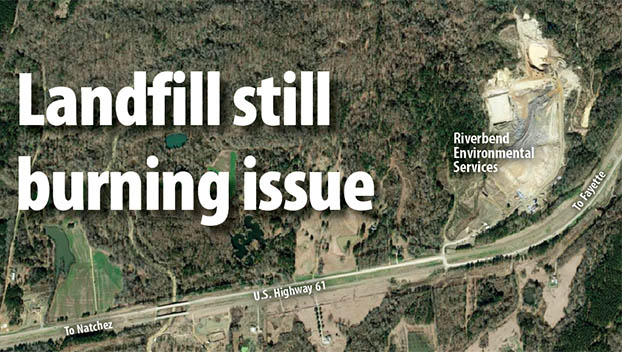 NATCHEZ — The City of Natchez, Adams County and the Town of Vidalia each have waste disposal contracts with a Jefferson County landfill company that has since filed bankruptcy beginning in October 2019.

Each of those governmental entities’ waste disposal contracts is still good for two or more years, officials said. If another company chooses to purchase the landfill from bankruptcy court, the new company would have to honor the existing contracts.

However, the Jefferson County landfill, owned by Riverbend Environmental Services LLC, shut down Aug. 16 due to a fire at the landfill, and each of the governmental entities using the landfill have had to make an emergency switch to another location, which is currently costing more than double per ton to dispose of waste for Miss-Lou residents.

The landfill has yet to reopen although the blaze has been extinguished, said Robbie Wilbur, communications director with the Mississippi Department of Environmental Quality.

“The fire at the Riverbend Landfill has been extinguished with the final remnants of the fire extinguished on Aug. 24,” Wilber said. “There is a prospective company that has entered into a purchase agreement approved by the bankruptcy court, but the sale is not complete. We do not know when the landfill will open, but if and when it does, MDEQ will ensure that it operates in compliance with the state’s solid waste laws and regulations.

“MDEQ has worked with the current owner and the bankruptcy court throughout the bankruptcy process to address operational issues at the landfill. We will continue to do so.”

For as long as the landfill remains closed, it is costing the Town of Vidalia $44 per ton to haul trash to a Waste Management landfill at Sibley instead when the town was being charged $15.94 per ton to utilize the Riverbend landfill, Mayor Buz Craft said.

Likewise, the City of Natchez passed an emergency order to haul trash to the Sibley landfill at a rate of $44 per ton when the city was paying $14 per ton to haul to Jefferson County, Natchez City Attorney Bryan Callaway said.

The Adams County Board of Supervisors also passed the same emergency order for $44 per ton. Adams County’s rate for disposing at the Riverbend facility is $19.39 per ton, said Joe Murray, Adams County administrator, adding the cost of each governmental entity’s garbage contract varies based on their location and bidding process.

Murray said if the cost hike to haul to Sibley continues, it could impact garbage fees for area residents.

The amount of trash that is hauled to the landfill varies depending on the season, the number of residents in an area and so on, Murray said. In July, Metro Service Group, which is the contracted garbage company for Adams County, carried approximately 580 tons to Jefferson County, Murray said.

Callaway said the Riverbend landfill could be opening soon under the operation and ownership of a new company, Greenway Environmental Services LLC.

“It appears that right now everything is moving forward with Greenway having the ability to take over,” Callaway said. “While the sale has not been fully consummated at this point with the bankruptcy court it appears there is going to be a temporary sale that that will allow Arrow Disposal Services to return to Riverbend shortly. We don’t know the timing of that yet.”

Murray said nothing has been finalized.

“If a new company, whoever it is, buys the landfill from bankruptcy court they will have to honor whatever contract is in place,” Murray said. “Once you’ve gone beyond the expiration period of the contract or if for some reason the landfill doesn’t reopen we would have to go out for a competitive bid.”

Craig Geno, who is the bankruptcy attorney for Riverbend, said the judge approved the sale of the landfill to Greenway Environmental Services LLC last week for $5.1 million.

“Greenway is going to operate the landfill for some period of time pending the outcome of litigation,” Geno said. “… (The landfill) was running out of cash and there was an injunction entered against them by a construction firm that stopped all work. The bankruptcy filing allowed it to operate again.”