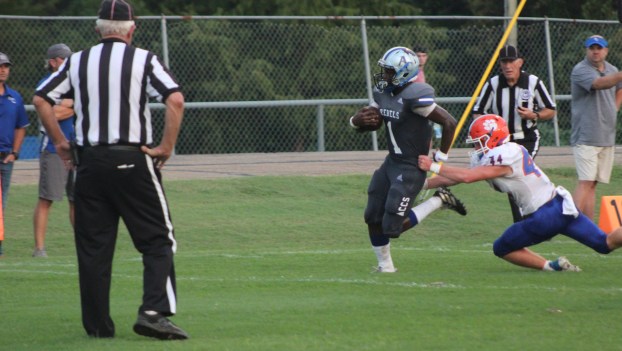 NATCHEZ — The Adams County Christian School Rebels will look to avenge last year’s lost to Jackson Preparatory School when they host the Patriots at 7 p.m. on Friday at Bobby Marks Stadium.

When these two teams faced each other last year at Jackson Prep, the Patriots scored 27 points in the second quarter and wound up defeating the Rebels 37-0. ACCS went into that game undefeated, but left wondering what happened — even against one of the state’s traditional powerhouses.

“We got up there and made three mental mistakes and that cost us 21 points in about five minutes,” said David King, Rebels head football coach. “You cannot do that.”

Both teams made deep playoff runs in 2019 in their respective classifications in the Midsouth Association of Independent Schools. Jackson Prep lost to Madison-Ridgeland Academy 48-33 in the Class 6A state title game. ACCS, as the No. 6 seed, advanced to the Class 5A semifinals before losing to No. 10 seed Starkville Academy 20-15.

The last time Jackson Prep traveled to Natchez to take on ACCS was way back in 2002, King said. And the only time the Patriots lost to the Rebels was even farther back — 1982, when ACCS won its first state football championship.

“It’s an honor to play someone of that caliber and Coach (Ricky) Black is one of the best coaches. His program is one of the premier programs in the state,” King said. “I have great respect for Prep and their tradition. But we’ve averaged 10 wins a year for the last seven years. We’re not chopped liver. Our boys will respect the heck out of them. But we will not be intimidated.”

King said his team will be working on “everything” in practice this week to prepare for the Patriots, who are 2-0 after their game at Oak Forest Academy was cancelled.

ACCS is 2-1 overall after the MAIS ruled that Clinton Christian Academy canceling its home game against the Rebels is also a forfeit win for ACCS, with the final score being 18-0.

“Jackson Prep, they get your attention when you put in the tape,” King said. “When you play Jackson Prep, you cannot make mistakes. You cannot have any penalties or turnovers against them. Period. You have to have a few playmakers. They’re going to dress out 93 players and we’re going to dress out 28. They’re well-coached at every position and they continue to come after you. Not get yourself too far behind with penalties and turnovers.”

When asked who will have to step up and have a big game for the Rebels to pull off the upset, King said everybody on the Rebels squad needs to step up.

And there’s very little difference between the Jackson Prep team that shut out ACCS last year and the one King said he expects to see Friday night.

“The only difference is that they will be playing in the white shirts instead of the blue ones because they’re on the road,” King said.