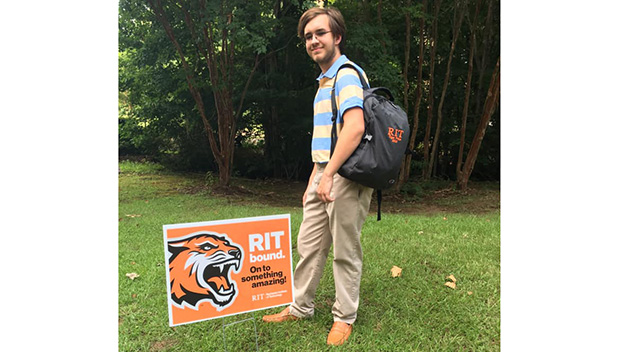 In preparation for his first semester at Rochester Institute of Technology in New York, Alex and his mom, Lisa Jordan Dale, have been going through a 14-day quarantine that started as soon as they crossed the state line on Thursday. (submitted)

NATCHEZ — In any other year, Alex Dale would have been exploring his new-found freedom on an unfamiliar college campus with a new set of friends.

Dale hasn’t had the traditional experience of moving into a college dorm amid the COVID-19 pandemic.

In preparation for his first semester at Rochester Institute of Technology in New York, Alex and his mom, Lisa Jordan Dale, have been going through a 14-day quarantine that started as soon as they crossed the state line on Thursday, Lisa said.

“The reality of it is it’s very confining,” she said. “We rented a house on a lake instead of a hotel room … so we have a beautiful view but we received emails from the state of New York that gave us our rules to follow.”

Alex and his mom weren’t allowed so much as a bathroom break or even a pit stop at a drive-thru restaurant before they were ushered through mandatory COVID-19 testing and ordered to confine themselves at a lake house they were fortunately able to rent east of Syracuse, she said.

“Within about an hour of crossing the state line they called us and we did about a 5 minute interview on the phone, went through a drive-thru COVID testing center and received negative test results (Tuesday). We were instructed that we couldn’t stop anywhere. We couldn’t go through a drive-thru. We had to go straight to our quarantine location.”

Mississippi, which is now one of the top growing states for COVID-19 cases in the nation, has been designated a hot spot and any travelers to New York from hot spots are given strict rules to follow.

Every day, the Dales receive text messages reminding them of their quarantine status and asking them if they’d experienced any symptoms of COVID-19.

Now halfway through their quarantine, the Dales say the most exciting part of their day is deciding what to cook for supper, Lisa said.

“We’ve supplemented groceries with Hello Fresh deliveries,” she said. “Before coming into New York, we’d spent the night in Erie, Pennsylvania, and got up early the next morning to go to Walmart. We’d checked online to see if they would do deliveries but when we got here we found out they don’t deliver to our address.”

Lisa, who is the Natchez municipal judge, said she continues to work under quarantine, relying heavily on Zoom for meetings. She had to order a few items from Amazon, including a printer and copy paper for work and a Keurig to brew coffee from the K-cups she’d brought without realizing the house only had a traditional coffee pot.

“We can still get things delivered to us, but when the UPS driver comes we’re not supposed to open the door,” she said. “The owner of the lake house did come to see us once but of course we kept our distance. … What was surprising to me was that people are seriously fearful of us just because we’re from Mississippi. … We’d made arrangements with (the house owner) to come to stay and she contacted us two days before we were leaving. You could tell the anxiety she had when she was talking to us. She was scared and she asked for our test results.”

Alex said he’d anticipated not being able to see and walk around New York upon his arrival and also anticipates a less than traditional atmosphere when he is finally able to move to campus on Aug. 13.

“My school has put out a fairly detailed plan for when we start,” he said. “I’ll have to log in to a website everyday and fill out a survey to check that I have no symptoms.”

Alex said he was given a time slot to move in and was only allowed to have one parent there to help him move for an hour.

When school starts on Aug. 19, Alex said some classrooms would have Plexiglass barriers separating the professor and the students and he would have a mix of in-person and online assignments.

Alex said for him, the most surprising part of being in isolation for a week so far is that it hasn’t been unbearable.

Alex said he’s been able to distract himself with an optional online class that was offered to students during the summer and brought a few games along to play during his ample downtime.

“It’s not too terrible,” he said. “The most difficult part is the lack of a daily structure. I’m looking forward to getting to my dorm. We’re anxious to get to Rochester to explore the town and get ready for school. … It’s nice that I get to spend some time with my mom before I start college on my own.”

Lisa said she felt blessed to have been able to rent a house instead of living in a hotel room for two weeks like other students were having to do before school.

“The students had the option to wait and check-in Aug. 12 and would be quarantined in hotel rooms,” she said. “The school would make food deliveries three times a day and do laundry changes for them but they would be left alone. I knew it would be hard with just us together for 14 days. … We’re lucky because we are at a house. We have our own bedrooms and bathroom and a patio and a pier we can walk out onto. We just can’t walk down the street. If we were at a hotel you literally couldn’t walk outside your hotel room.”

NATCHEZ — Last week has been the most challenging yet since the COVID-19 outbreak began in February for healthcare workers... read more