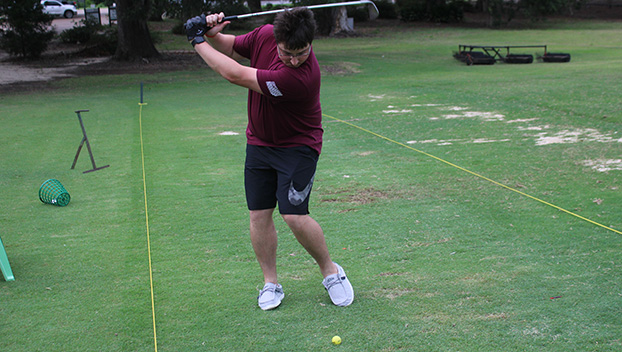 Justin Allgood taking a swing at a golf ball on the driving range at Duncan Park Golf Course. (Patrick Murphy / The Natchez Democrat)

NATCHEZ — At the age of 10, Justin Allgood took his first swing on a golf course.

Allgood then played golf for two years at Adams County Christian School, where he also played baseball, soccer and tennis for the Rebels.

When Allgood played golf at ACCS, he said the program was in its younger stages.

“We became interested in the sport itself and wanted to learn more about it,” Allgood said.

Since playing golf in high school, Allgood goes to Duncan Park Golf Course where he was with Will Ray when The Dart landed there on Wednesday afternoon.

Allgood and Ray were hitting golf balls on the driving range at Duncan Park Golf Course. Allgood said he wanted someone to play golf with and Ray was interested in playing golf.

Besides playing golf, the 24-year-old Allgood is part of the nursing program at the Alcorn State University campus in Natchez.

Allgood said he is glad he has continued playing golf.

“It is a fun sport and it is something I enjoy playing casually,” Allgood said. “It is something I try to get better at every day. It is one of the few sports you can play when you get older.”

A small army of volunteers helped move 1,700 boxes of frozen food from the back of an 18-wheeler to the... read more