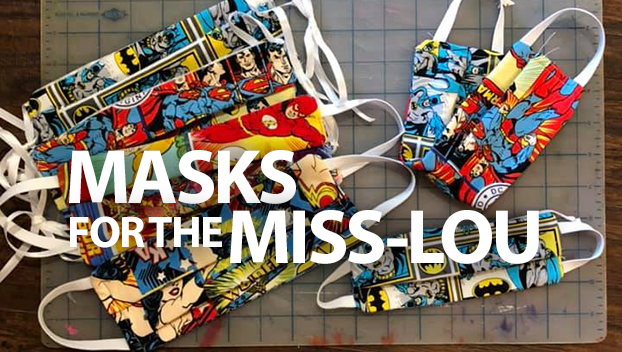 NATCHEZ — What started as a simple way to help a friend has turned into a movement to help area healthcare providers.

Rivers Ater started the Facebook group “Masks for the Miss-Lou” after she received a positive response from a mask she sewed together for a friend Friday night.

“My mom and I posted a picture on Facebook because we were so excited,” Ater said.

Then the messages started pouring in.

“It was insane,” Ater said.

The local seamstress started the Facebook group Saturday morning and in three short days, the group has grown to more than 1,400 members.

As soon as things started to take off, another local seamstress, Bethani Douglas, started to help out.

Monday morning, Douglas was delivering fabric to people who are helping to sew together and distribute them during the COVID-19 crisis.

“We have 25 to 30 people that are sewing locally,” Douglas said.

The idea is simple. Healthcare providers in need of masks make requests on the page.

Area seamstresses who are willing to make masks then reply to the individual request and make arrangements to have the masks delivered.

“We are matching seamstresses with those that need masks,” Ater said.

Douglas said all of the time and material is donated.

“The seamstresses are volunteering their time,” Douglas said. “Everything is free. Fabric is from scraps we had at home, seamstresses have gone out an purchased or donated.”

Ater said since she started the group, requests have been coming from health care workers across the country.

“We have had people requesting masks from as far away as San Francisco,” Ater said.

Ater said right now the group is focusing on the local need but will be willing to help those outside the Miss-Lou “if we ever catch up.”

“We are trying to help start groups in other communities to help their areas,” Ater said.

Douglas said a drop-off location for those who want to donate materials had been created at Vidalia Market.

A second drop off location for completed masks has also been created at The Gables on Carter Street, Douglas said.

“That location is for those who want to sew masks, but not do not want to deal with going out to find the need,” Douglas said.

For those who want help but cannot or do not want to sew, Douglas said the group had created a way people can donate to the cause.

“We have a donate button set up on (the Facebook group page) where 100% of what they donate goes directly to the cause,” Douglas said.

Also on the Facebook page is a chart that offers local seamstresses guidance on choice of materials and patterns.

Ater said she did not know how many masks had been made in the last three days.

This weekend, Ater said she created, with the help of her family, 120 masks for the cause.

“(Sunday) My mother was side-by-side sewing, and my husband and dad were cutting out patterns,” Ater said. “We had an assembly line going.”

Ater said those who do not have a Facebook account could email her at rivers07h@bellsouth.net to find out how they can help.

NATCHEZ — An inmate in the Adams County Jail who has been held for a little more than a year... read more

Natchez is smartly reopened for business

Your Take: A clear night for balloons