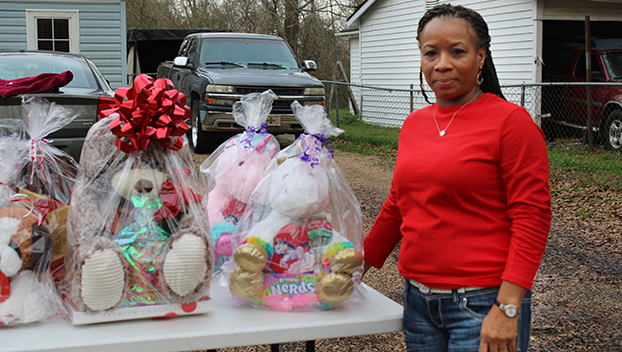 Jacqueline Coleman with some of the baskets she created for Valentine's Day on Feb. 14. (Patrick Murphy, The Natchez Democrat)

When The Dart landed on Morgantown Road, Jacqueline Coleman was preparing to move a bunch of her baskets into her husband’s truck for another day of sales.

Inside Coleman’s house on Morgantown Road, a variety of baskets fill her living room. Some of the baskets have already been made while others are waiting for Coleman to put them together.

When she is not selling baskets, Coleman teaches independent skills for the foster children in the custody of the Adams County Department of Child Protection Services.

“I started making (the baskets) when the kids in custody were excited about it,” Coleman said. “Then, they started asking me, ‘are you going to do the baskets this year?’”

With a little persistence from friends and the children in Child Protection Services, Coleman said she decided to continue creating the baskets.

Coleman put together 60 or more baskets this year and sells them to both the kids in Child Protection Services and people in the community.

For the people in the community, Coleman said she sells the baskets filled with stuffed animals and candy for $10.

“I know parents can’t afford the expensive baskets that other people sell,” Coleman said. “I sell quite a bit of them and I just enjoy making them.”

But it’s not just limited to people in the community and foster kids.

“It’s just something that I do because I enjoy doing it,” Coleman said. “I don’t do it for the money because I’m not making a lot. I just like doing it.”

A group of wild cats paraded down Washington Street Saturday evening as part of the annual Mystic Krewe De Who... read more