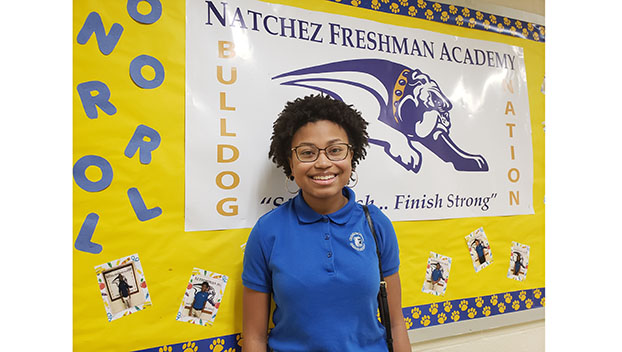 Harris, the daughter of Kimberly and Anthony Harris, said she aspires to study nursing at the University of Southern Mississippi and would either like to become a pediatric nurse or a pediatric neurologist.

“I like helping kids — kids specifically,” she said. “… I had a neurologist when I was little and enjoyed being around him and all of the things that he did. I realized that I kind of had a spark for it, so I decided that is what I wanted to do. I was about 10 years old when I decided that.”

Harris is a member of the Natchez Freshman Academy Newsletter club, the track team, the Delta Youth Commission and the National Beta Club and was elected to be “Miss Freshman” this school year by her peers.

“Mr. Hooper has been a huge part of my accomplishments this school year,” she said.

Harris said her hobbies include traveling, reading a good mystery book and spending time with her family.

“I love when a book takes a big turn — when you think that one thing is going to happen and it catches you off your guard,” Harris said.

As a member of the Delta Youth Commission, Harris said she participates in weekly meetings and volunteers with several community service organizations.

“I love helping out in the community,” Harris said. “Around Christmastime, I passed out toys for Toys for Tots to kids in a neighborhood around Liberty Road. It felt good. The kids were smiling and we did too.”

NATCHEZ — Adams County constables may soon be getting Tasers in order to protect themselves from possible threats on the... read more

Mississippi man admits to being moonshiner, feds say he owes $1.2 million in state and federal taxes

Elimination of nonconference games could have ripple effect

NBA teams at Disney had tough travel-party decisions to make

Softball Round up: See which softball teams won close games

Gibson is our pick for next Natchez Mayor