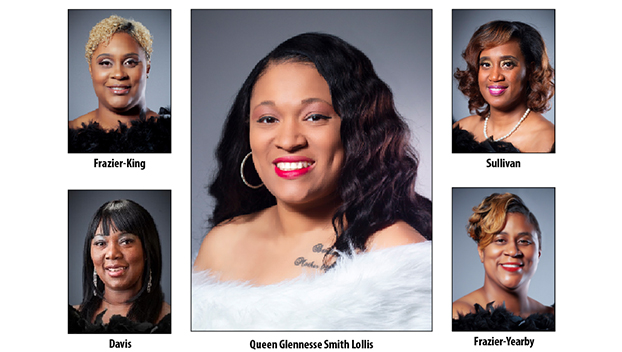 Special to the Democrat

The Krewe of MER will host its 27th Annual Grand Mardi Gras Ball on Saturday, February 15, 2020, at the Natchez Convention Center.  The theme for the Mardi Gras Ball is an “Empire State of Mind.” Guests should be prepared to enjoy a night of splendor, spirits, and merriment as MER will transform Natchez, the oldest city on the river, into New York, better known as the Empire State.  The 2020 Royal Court will feature:

Glennese Smith Lollis is the CEO of GMSS (pronounced GEMS), a non-profit organization formed to help abused families and children. Glennese is also the owner/operator of Taxes By Me, As a certified tax preparer. Glennese is currently a provisional certified mental health therapist in Mississippi and Louisiana. Glennese earned a bachelor of science in interdisciplinary studies in 2009 and a masters degree in secondary education (endorsement: counseling) May 2011, both from Alcorn State University.

Glennese also became a published author June 2011, writing a book titled, “Surviving a Thousand Deaths: The Glennese Smith Scott Story.” Glennese also feeds the homeless and families every Wednesday. She is currently working on opening a temporary shelter for abused children and families and she also plans to allow the homeless to shower daily and eat a meal.

Glennese is married to Nathan Lollis and has three children, Lexus, Camry, and Layla. One grandchild, Jachari and five stepchildren. Her motto is “Great Motivation Starts with Self; Be Your Own Best Drive.”

Jarita Frazier–King, is a lifelong native of Natchez. She graduated from Natchez High School in 1995 and later graduated from Alcorn State University with a bachelor of science in healthcare administration in 2015. Also, in 2020, she will graduate with a master’s degree from Alcorn, in workforce education leadership. Jarita is the co-owner of Natchez Heritage School of Cooking, LLC and the assistant manager of Gabsen Skies Consulting, LLC. She also serves as the CEO of Southwest Wellness Association of Mississippi, which is a non-profit organization committed to improving the overall wellness of the Natchez-Adams County.

The New Roads Kitchen Project serves as her mentorship, youth and adult advocacy and workforce education program to enhance workforce skills for re-entry adults and disengaged youths to help produce more productive citizens in the community. Jarita Frazier-King is a member of several community boards and a member of the Mississippi Black Leadership Institute (MBLI) Organization, Order of Eastern Star Edna Anderson #12, Lizzie Shoemaker Daughter of the Elks, and the Adams County Branch of 100 Black Women. Jarita received an honorable mention from The Natchez Democrat as she was listed as one of the “100 people you need to know in the Miss-Lou.” She is married to Roderick King and they have four daughters, Jakerria, Gabrielle, Senia, and Skylar, and one granddaughter, Raylee.

Neashion M. Davis is a 1996 graduate of Franklin High School and attended Hinds Community College in Raymond. She is a 2000 graduate of Alcorn State University where she received a bachelor’s of science degree in business administration and a received master’s degree in secondary education/ guidance counseling in 2002. She is employed as an administrator intern for the Concordia Parish School District.

She is married to Anthony Davis and together they have four children, Gabriel Malik, Trianthonee, Deja and TaMaya. They also have three grandchildren.

She is an active member of Pilgrim Missionary Baptist Church, serves as 2nd Vice President for Natchez Alumnae Delta Sigma Theta Sorority Inc., a member the Order of Eastern Star and a has been a loyal member for 15 years to the Krewe of MER.

Her hobbies include shopping, traveling, reading, tailgating but most of all spending time with family and friends.

Neashion often reminds herself “Trust the Vibes you get, Energy doesn’t Lie!”

Tangela Sullivan, a lifetime resident of Natchez and is the wife of Marcus L. Sullivan. Together they have two daughters, Jermia R. Page and the late Markia S. Sullivan. Tangela is employed as a quality assurance manager at Adams County Correctional Center in Natchez, where she also serves as the facility public information officer and ethics liaison.

Tangela is a proud graduate of Natchez High School and Copiah-Lincoln Community College. She has also completed studies at Alcorn State University, “Where the Grass is Greener, the Air is Clearer, and the Water is just a little bit Sweeter!”

Tangela is a 2013 graduate of the Natchez-Adams County Chamber of Commerce’s Leadership Natchez. She is an active member of Greater New Zion Baptist Church, Krewe of MER and the Order of Eastern Star. As an advocate of Childhood Cancer Awareness, Tangela and her husband organize and work to sponsor annual toy drives to benefit Mississippi’s only Children’s Hospital, Blair E. Batson Hospital.

During her spare time, Tangela enjoys shopping, spending time with family and friends, traveling and supporting her New Orleans Saints! Her motto is: “Be grateful for each day of life you have been given and with a humble heart, cherish each moment.”

Courtney Danielle Frazier-Yearby is married to Hannibal Yearby. She is the younger daughter of the 1998 King and Queen of Mer, Billie Joe and Shirley F. Frazier. Courtney is the sister of Jarita Frazier-King, 2008 Queen of Mer and Linton Fitzgerald III, 2008 King of Mer.

Courtney is a 1999 graduate of Natchez High School. While in high school, she was selected as a candidate for the All-Star Dance Team in Super Bowl XXXIII, which was held in Miami FL. In 1999, Courtney attended Jackson State University for one year, and later transferred to Copiah Lincoln Community College.  She received an associate degree in computer science from Co-Lin. Courtney is employed by Walgreens pharmacy as a certified senior pharmacy technician.

Courtney is a member of Richland Baptist Church, where she serves on the usher board and assistant secretary. She is a member of the YPIA Society in Churc Hill, and a member of NAACP.  She is the mother of three children: 19-year-old Jada, 13-year-old Keimon and 6-year-old Hanna. Courtney is also has a goddaughter, Ivory, and a special aunt to Gabrielle, Senia and Skylar.

In her spare time,  she enjoys swimming, rooting for the Baltimore Ravens, watching TV with her husband, meeting new people at work, shopping and spending time with family and friends.  Courtney lives by the motto: “When a person gives, he or she should never remember giving it; but a person who receives should never forget receiving it.”