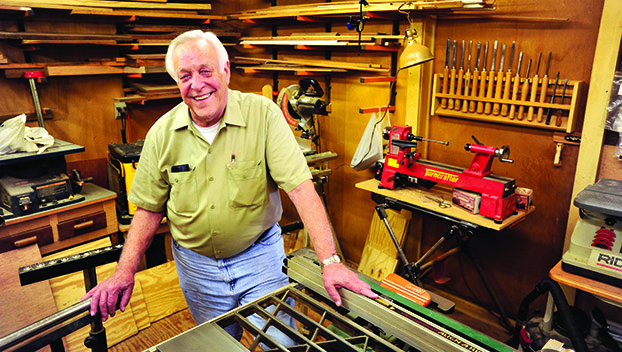 Forest Persons was known for his woodworking skills, which he used to build furniture and repair things for local organizations an charities. (file photo)

NATCHEZ — Forest Persons was a renaissance man who loved his community, friends and family members said.

“He was my renaissance man,” said long time friend Nancy Hungerford. “He was a very clever person who was good at many different things. Clever was a strong suit for him.”

Persons’ grandson, Jason McCoy, agrees that his grandfather was a man of many interests and talents, including woodworking and community involvement.

“He was a wealth of knowledge and had wisdom, experience and intuition,” McCoy said. “He was a part of so many circles, everybody will have a difference story to tell.”

Persons worked many years as a customer service representative with Mississippi Power and Light and later with Entergy.

After retirement Persons remained active in the community including being a district governor in Rotary International, the Sergeant At Arms for Natchez Rotary Club, a member of the Boy Scouts executive board and a member of the Merit Health Natchez hospital board, among other involvements.

In addition to those involvements, Hungerford said Persons was generous in supporting the community.

“Forest was fiercely loyal to his company, his work, very much to his family, his church and to organizations and things that meant a lot to him,” said Hungerford, former director of the Natchez Children’s Home. “He was very supportive of children’s home.”

Hungerford said Persons and his wife, Barbara, served on the board of the children’s home and after Forest retired he quietly helped out behind the scenes at the children’s home, including rewiring the building and helping the facility set up a generator.

In addition, Persons used his woodworking skills to build furniture and repair things the children’s home.
“He was funny, humorous, smart and deeply intelligent,” Hungerford said. “There was not much that he could not do.”

Andrew Calvit said he first became friends with Persons in 1975 when Persons was working at Mississippi Power and Light.

“Forest was a super nice person and was the living example of the Rotary motto service above self,” Calvit said noting his community involvement. “He really loved his community.”

Calvit said Persons was dedicated to the local Rotary Club and supported Calvit when he served as president a couple of years ago.

Concordia Parish School Board votes to increase its pay

Chefs do a lot of cooking outside the box