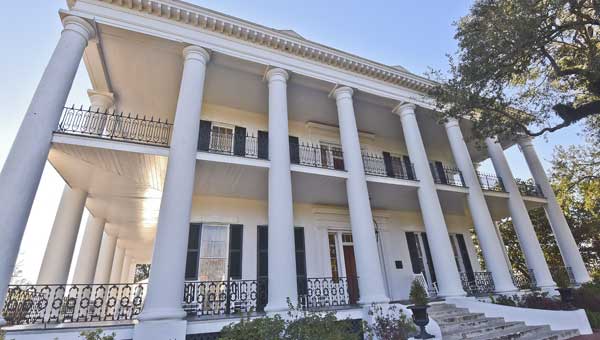 Dunleith, Bowie’s Tavern to be sold in foreclosure this week

NATCHEZ — One of Natchez’s most significant antebellum mansions will be auctioned on the Adams County Courthouse steps Friday, but don’t expect to pick up the palatial estate for a little pocket change.

It’s likely to be purchased, at least temporarily, by the foreclosing bank.

Natchez-based United Mississippi Bank foreclosed on Dunleith Historic Inn after its Louisiana businessman owner filed bankruptcy and owed the bank, among many other creditors, millions of dollars.

The future of the mansion, dubbed “the most photographed house in the South,” is uncertain, but it’s highly unlikely a third-party buyer will swoop in and make a credible bid literally on the courthouse steps. The “auction” is mostly a requirement of Mississippi’s somewhat antiquated foreclosure laws.

Sources familiar with the bankruptcy said most likely United Mississippi Bank would wind up having the “winning” bid, because they may be the only ones to show up for the auction.

Since the law stipulates bidders must have cash, it’s also unlikely that a would-be buyer would bring a suitcase of cash or a cashier’s check filled with zeroes, though the bank would certainly consider such an offer if one materialized.

Dunleith became entangled in its owner’s personal bankruptcy approximately one year ago. A federal judge’s ruling in December cleared the way for United Mississippi Bank to foreclose in an attempt to recoup the $7.3 million the bank says businessman Michael Allen Worley owes.

Worley filed a personal bankruptcy under Chapter 11 codes on Jan. 8, 2018, citing more than $107 million in liabilities, with just more than $80 million in assets.

Among Worley’s assets were three Natchez businesses and associated properties including: Dunleith Historic Inn and The Castle restaurant, Bowie’s Outfitters and Bowie’s Tavern.

United Mississippi Bank foreclosed on Bowie’s Tavern, and it will be auctioned today to the highest bidder — also likely to be the bank.

Barring surprise — and credible — bids, the bank will take possession of both properties and likely continue operating the businesses until new owners can be secured.

Bowie’s Outfitters was sold in September to Roberts and Knost Investments, an LLC formed in August. The LLC shares a Baton Rouge address with the Excel Group, an industrial construction firm, owned by David Roberts.

The bankruptcy trustee had been working to sell Dunleith and Bowie’s Tavern. The last publicly listed price was $5.95 million. The listing suggests the house is “The most photographed house in the South.”

Dunleith was built in 1856 and has been operated as a commercial bed and breakfast facility since 1976. Dunleith currently has 22 luxury rooms available for overnight guests and has been the venue for many weddings and large parties throughout the years.

NATCHEZ — In recent days, some Natchez residents have been circulating a video on social media that shows Adams... read more