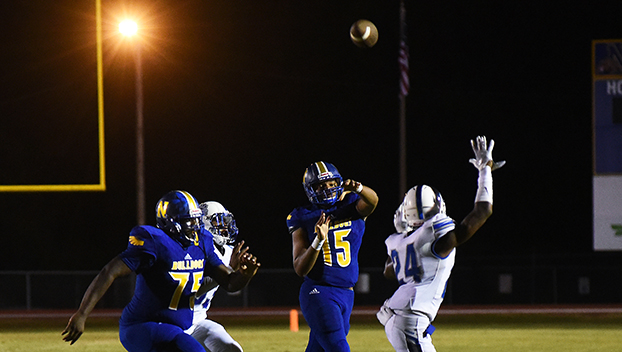 NATCHEZ — The Natchez High School Bulldogs will have to play their ‘A’ game if they are to defeat the Laurel High School Golden Tornadoes in an MHSAA Region 3-5A game at Tom F. Williams Memorial Stadium.

Kickoff between first-place Laurel and third-place Natchez High is set for 7 p.m. And a lot is on the line for the Bulldogs. If they win, they automatically clinch the region’s No. 3 seed.

The Bulldogs head into this game with a 7-3 overall record and a 4-2 record in region play. They narrowly escaped with a 21-14 win on homecoming night over Forest Hill High School.

“We’re basically playing for the No. 3 seed,” Bulldogs head coach Roy Rigsby said. “If West Jones beats Brookhaven, we’re No. 3. I really don’t want to get into those scenarios. The great thing is we’re in the playoffs. We’re excited about that.”

Rigsby said the players are focused and ready for task at hand – beating a Laurel team that is on a six-game winning streak after starting the 2018 season 1-3.

“We’re strong-minded. We understand what we’re facing. Laurel is No. 1 in the region. They’re constantly making the playoffs. We’re excited to be able to compete,” Rigbsy said,” Rigsby said.

Laurel heads into this game at 7-3 overall and 6-0 in region play. Among those wins were a 23-17 win at home over West Jones High School in overtime three weeks ago and a 40-9 win, also at home, over North Pike High School last week. They will be the Region 3-5A No. 1 seed regardless of the outcome Friday night.

“Their running game, their offensive line is strong. They have a good running back,” Rigsby said. “Defensively, the secondary plays well. There’s a lot we respect about them. It’s a reason why they’re on a six-game winning streak. It’s a reason why they’re the No. 1 team in our region. Those guys have grown into a tradition of championship football. We are by not means afraid. There’s no fear factor.”

Rigsby said he expects senior quarterback Paul Hargrave to have a big game Friday night for Natchez High to have a chance of pulling off the upset.

“He’s handled big games. We expect Paul to bounce back from a dismal game against Forest Hill,” Rigsby said. “On the defensive side, the linebackers – Ryon Rigbsy, Brad Dean (Jr.) and James Myles – all three will have to have a big game.”

WOODVILLE — The Wilkinson County High School Wildcats wanted to make sure they took momentum into the MHSAA Class 3A... read more