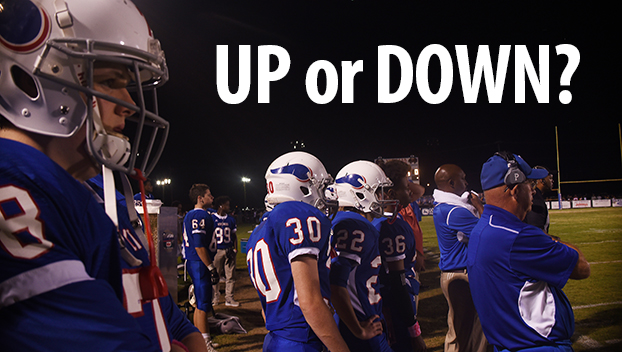 Up or Down: Vidalia at crossroads after back-to-back losses

VIDALIA — Vidalia High School head football coach Dee Faircloth said that the Vikings are now at a crossroads this season after back-to-back losses to LHSAA District  2-2A and Concordia Parish rival Ferriday High School and Class 4A Tioga High School.

“We can go up or down. We’re still at No. 9 (in the LHSAA Class 2A power ratings). We’re due for a home game. We go higher and we’re guaranteed two home games,” Faircloth said.

First things first, Vidalia must travel to Mangham, La. to take on the Mangham High School Dragons with kickoff Friday set for 7 p.m. The Vikings are coming off a 57-32 loss to the Tioga Indiana that dropped them to 5-3 overall. They are 3-1 in district play after a 21-7 loss at home to Ferriday two weeks ago.

“We didn’t have a good performance (at Tioga),” Faircloth. “Although we had about 600 yards of offense, we didn’t score in the red zone. If we did that, it would’ve been a basketball score like 62-57. We didn’t make any stops. Neither team could stop the other. We made a lot of mistakes. It wasn’t a good night.

Faircloth added that his team came out flat and that perhaps the players had still not completely gotten over the loss to Ferriday. However, he was pleased with the way the offense performed – until it got inside the Tioga 20-yard line.

“When you have over 600 yards of offense, you’ve got to be pleased with that. Not scoring inside their 20, that put a damper on it,” Faircloth said. “We felt like we could win that game. It’s a numbers game. We’ve got 386 students. They’ve got about 1,000 students. Hopefully we will bounce back at Mangham.”

Tristan Weatherly threw for over 300 yards and two touchdowns and Cam’ron Randall had 180 rushing yards and three total touchdowns, two rushing and one receiving.

Mangham is 2-6 overall and 1-4 in district play after falling at Ferriday High School 51-14. However, the Dragons were only 12-7 at halftime of that game.

“That’s a wakeup call right there,” Faircloth said. “They’re a pretty physical ball club. They’re a young team. They’re basically country boys and that’s my hometown. They like to knock somebody off their tail and that’s what makes their day – hunting, fishing, and football. They beat us last year (21-7 at Vidalia) under the worst conditions imaginable. Our kids better be ready. They’re in for a dogfight.

Faircloth said the offensive line is going to have to have a big game for the Vikings to get this road win and stay in the district championship hunt.

“Blake Irvin hurt his knee last week. We had another lineman out last week. We’re having next man up on the offensive line,” Faircloth said. “Our running backs and our quarterback will always have to have a big game. Defense is going to have to regroup. We held Rayville, which is a good ball club, to two first downs (on Sept. 28) and then we gave up 57 points last week. We’re going to have to get back to what we do to win ball games.”