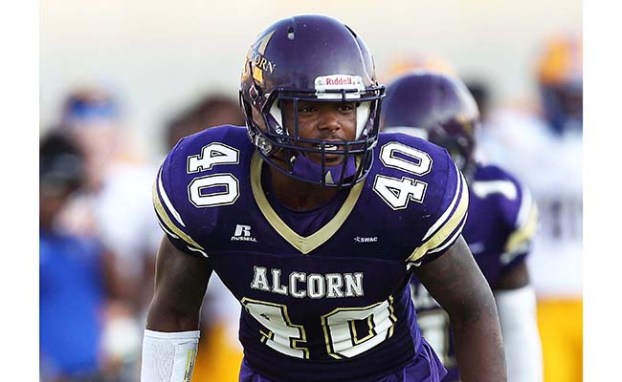 For the past three years, senior Trae Ferrell has played linebacker for the Alcorn State University football team. In his final offseason, Ferrell has earned preseason accolades at linebacker.

He has been named to the preseason All-SWAC first team and the preseason HBCU second team by HBCU Gameday. In his final season in Lorman, Ferrell will not only play linebacker but also compete with his hand in the dirt at defensive end.

“One thing Trae does well is that he is explosive off the edge,” said defensive coordinator Cedric Thornton. “He gets to the quarterback. A guy like that who can get into the backfield and disrupt a quarterback is valuable. I just wanted to allow him to use his strengths a little more. It will help him and the program.

“We have a lot of players that I have to be smart about where I am putting them. Trae is a major component in that. Like I said, he is going to be an edge rusher for us.”

Last season, Ferrell was tied for second on the team in tackles for loss (11) and sacks (4).

When Thornton first approached Ferrell about the position, the first year defensive coordinator said he was met with hesitation by the linebacker. However, Thornton said any player — especially one who is moving to a new position in his final year — would be uncertain.

Although Ferrell was hesitant, he said playing defensive end is nothing new to him. While at Atlantic Coast High School in Jacksonville, Florida, Ferrell played defensive end.

“I can help the team out in that area,” Ferrell said.

In his final year of high school, Ferrell recorded 57 tackles and 13 sacks.

Although Ferrell has not played the position in three years, he said there was no rust when he played defensive end this spring.

“My moves came back pretty quickly because from blitzing at linebacker, you still have to use your pass rush moves,” Ferrell said. “So I kept my moves up to date.”

Even though Ferrell primarily dedicated his time to defensive end, he said Brave fans should expect him all over the field.

“I’ll definitely continue to play linebacker,” Ferrell said. “But I’m going to play a lot of different positions this year. One thing is for certain though, I’ll be rushing the passer a lot.”

Thornton said Ferrell might play some defensive tackle this year, too.

With the new position come big expectations for Ferrell. He said he wants to be first team All-SWAC at defensive end and linebacker. Ferrell did acknowledge how hard that would be, but he said he can easily obtain that honor at defensive end.

Thornton also has high hopes for Ferrell this year.

“I think he can finish this season with 12-plus sacks, easy, “ Thornton said. “The way the game has evolved, it’s an offensive friendly game. The more explosive players you can get on the defensive side of the ball, that can create negative plays, the better it is for a defense. Trae is one of those guys who can and will create negative plays. Whether it’s a tackle for loss, sacks, forced fumbles, you name it, he is one of those guys. There is not a tackle in this league who will be able to block him off the edge.”

Thornton said although he asked Ferrell to change positions for the betterment of the team, the move should benefit the Florida native, too.

“Everybody who plays college football wants to play in the NFL,” Thornton said. “He probably won’t get that opportunity at defensive end because of his size. But when he puts up numbers like I expect him too, scouts will notice, come see him and probably ask him if he can play linebacker — which he has been doing for three years. Then that transition will be easy for him and hopefully scouts will be like ‘We have something here.’”

Though this position change could assist Ferrell in his future, he is happy to play defensive end if that means more wins for Alcorn.

“I know what the coaching staff is asking out of the position, since I have been here a while,” Ferrell said. “I’m ready to replace whatever production or shoes they ask of me. And if this move means we have a better chance to win it all this season, I need to do it for my team.”