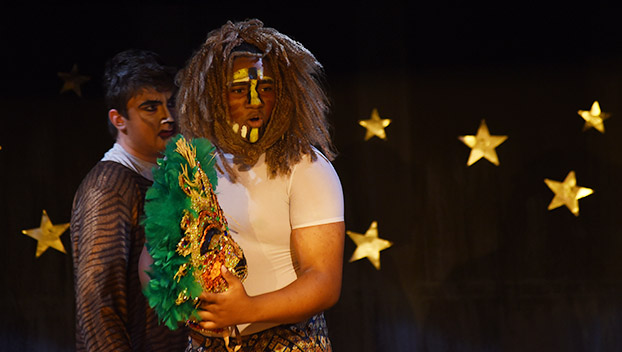 NATCHEZ — Xavian Lewis said he decided to “dive in” to the arts this summer and started his debut at Natchez Little Theatre in a lead role as adult Simba in “The Lion King,” and now he loves his immersion into the arts.

Lewis said he never anticipated he would be an actor, but said he has now discovered a passion for performing arts.

“I’ve been playing back and forth over the summer about whether I would participate in the NLT,” Lewis said. “I thought about what I wanted to do but didn’t think I’d be great at it. Then I found out they were doing ‘The Lion King,’ which was one of my favorite shows as a kid.”

Lewis — who will be starting his junior year at Natchez Early College Academy in August — said he auditioned for Simba and did not expect to get the part. Lewis said he has always loved singing and music, but acting was never something he saw himself doing.

“I was very surprised (to get the part),” he said. “At first we were just going over the songs, and I love singing. We did ‘Can You Feel the Love Tonight,’ and I didn’t even know the song until we did it — but I’m a fast learner.”

Lewis said his parents, Tricia and Dywon Lewis, encouraged him to utilize his talents and pursue his dreams.

“My mom and dad were very supportive,” Lewis said. “I’m not a quitter, but they pushed me to keep going and to not give up. They are the key reason why I participated in the NLT this year.”

Lewis said learning lines for his role was a difficult feat he had to master.

“Zaide Paine (who played young Simba) came to me in the third week and asked, ‘Do you know you your lines?’” Lewis said. “He pushed me to try harder.”

Lewis said he is musically inclined and taught himself to play the keyboard and organ at the Church of God in Christ in Sibley, though he has never taken any formal lessons.

Lewis said he loves every subject in school, especially history and economics. He is actively involved in the Student Government Association and has been elected as class president for the past two years.

Lewis said when he graduates, he wants to major in either business administration or music education. He hopes to, one day, start a school for artists who do not have any means to receive a music education.

“My big life goal is to go into music production and education and to start my own music company,” Lewis said. “It’s my big dream to help young people who are musically inclined but don’t have the resources to take it further. With business administration I know I can get into bigger things.”

Lewis said his recent experience in “The Lion King” production further encouraged his aspiration and helped him develop as a performer and as a leader. He encourages his peers to try their best at what they are good at.

“It will not be easy, but you need people there to push you,” he said. “If you don’t have someone there to encourage you, push yourself. … In school, we did plays, but I was in the shallow end of the pool then. With the NLT, I’ve really dived into the deep end of the pool — and now I feel like I can swim.”