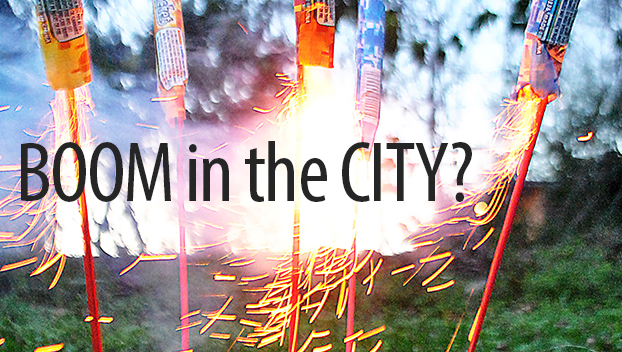 NATCHEZ — A longstanding belief that setting off fireworks in Natchez is illegal has now come into question, though authorities still strongly urge residents to avoid the practice.

Approaching his first Fourth of July as Natchez Police Chief, Walter Armstrong said after doing some research he could not find any law on the books prohibiting fireworks usage within city limits, despite what he had previously thought.

“I wish it was an ordinance,” Armstrong said.

Based on his understanding, Armstrong said, the idea of a fireworks ban worked more as a de facto ordinance, with officials having thought for the past several decades that such a law existed when in reality, that does not appear to be the case.

After aiding Armstrong in his research, Fire Chief Aaron Wesley said he too found no sign of such a law, even when digging back into the city’s older ordinances.

“There should be one. There needs to be,” Wesley said.

Natchez Mayor Darryl Grennell said he remembered being told about this ordinance when he was a little boy, recalling a time when his brother had tried to pop firecrackers that he had just purchased.

“My oldest brother went in the store to buy firecrackers, went out on the street and started popping them, and the people in the store called the police,” Grennell said.

The city’s current attorney, Bob Latham, said though he had assumed such an ordinance existed, no one had ever asked him to look into it.

Even if in fact no ordinance exists, public safety officials still strongly caution against using fireworks in the city because of the potential to start fires in residential areas.

“Overall, I just think it’s a good time to celebrate, but in the past, I know we have gone to car fires … we have gone to house fires (started by) fireworks,” Wesley said.

And even though no law appears to strictly prohibit the fireworks, use of such instruments could violate the city’s noise ordinance that police will still be enforcing, Armstrong and Wesley said.

To alleviate the potential for fires, Wesley said residents should clear debris surrounding their houses, such as dry grass and leaves. Otherwise, he said, any sort of spark from fireworks could then lead to a destructive house fire.

“If something lands in that debris, it’s just an ignition point right there waiting to happen,” Wesley said.

Both the fire and police chiefs urged city residents to avoid shooting off any projectile that flies into the air and would have an uncontrollable path.

Additionally, they said, rather than shooting their own fireworks, citizens should consider watching the fireworks show that will be part of the Fourth of July Festival put on by the Vidalia Beautification Committee on the Vidalia riverfront from 10 a.m. until 10 p.m. today with the fireworks show commencing at dusk, approximately 8:15 p.m., over the Mississippi River and viewable from both sides of the river.

NATCHEZ — Tuesday’s public hearing on the 2018-2019 budget for the Natchez-Adams School District was dominated by questions about the... read more