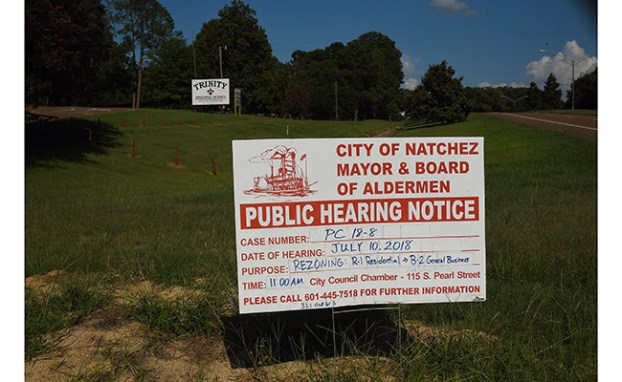 NATCHEZ — The potential rezoning of the former Trinity Episcopal Day School property will go before Natchez leaders for final approval in less than two weeks.

After a month of deliberation, the Natchez planning commission approved on June 21 Trinity Episcopal’s request to rezone the property — located off U.S. 61 South and owned by the church — into a B-2 business district to make the property easier to sell. The final say, however, rests with the Natchez Board of Aldermen at its July 10 regularly scheduled meeting.

The church had initially applied for a B-4 zone, which City Planner Riccardo Giani called “the most intense commercial use” of all the business zones. After hearing concerns from residents of the nearby Woodhaven subdivision, the church vestry agreed to step down to a B-2 in the interests of compromise.

Using city planning principles and the city’s comprehensive plan as guidelines, Giani said he wrote in his staff report that downgrading the commercial usage would make for an easier transition given the abutment of a residential area.

A landscape buffer, Giani said, also would be implemented between the business and residential properties in that area.

Multiple residents at a May 17 planning commission meeting asked the property not be deemed a B-4 zone, which could allow for large-scale commercial enterprises. But one resident even said that a B-2 zone, which would permit establishments such as bars, nightclubs and hotels, would be too overbearing on the area.

Giani, however, said the church had written within its own deed that such enterprises and others that could be considered disruptive to nearby residents would not be permitted, mitigating some of the concerns brought forth.

“That was really an amicable solution for this project, and I think that’s how they bridged compromise,” Giani said.

Giani said the planning commission did not receive any negative feedback at its June 21 meeting.

Aldermen are scheduled to take up the rezoning request at their next regular meeting, scheduled for 11 a.m. Tuesday, July 10 in the City Council Chambers, located at 115 S. Pearl St.